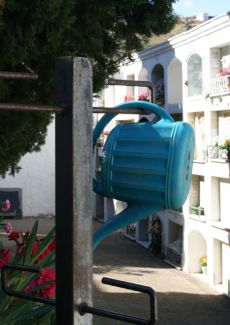 Decay of matter and meaning are the most salient features of a ruin. The decaying object becomes free and returns to nature in quite a few aesthetically and theoretically categorizable steps. For almost 30 years, this process of “falling” into new forms and contexts of meaning of architectures and idea-buildings has been the subject of this photo series shown in excerpts. Here, too – among other social and historical contexts – the history of the garden with its ruinous allusions to the dying and becoming of nature, as “memento mori” and “vanitas symbol”, plays the decisive role. The ruin is the politically charged symbol of the picturesque, the “image-worthy,” which manifests itself in the breaking through of the formerly strict geometric lines of built things with the help of the constant vigor of plants. But it also stands for leaving the ground of representation, for drifting into the subversive of functionlessness and the release of dream substances in uncontrollable (excesses). Extracted from the GartenArchiv, these photographs prove my never-ending interest in the pictorially appearing gaps between “already” and “still” – between “already in decay” and “not yet completely reclaimed by nature”, but also: between the survival of an idea/ideology in the “nostalgic” field and its complete “disruption”.