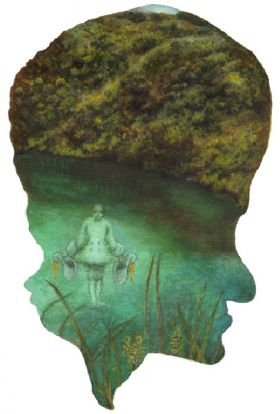 Text extract:  “The Order of Friendship” by Christine Heidemann for “Jardins d’amis : Randonnées”

Caroline Bittermann has been working on the series Jardins d’amis, which now comprises more than 150 portraits, from 2006 to 2014. Inspired by a deep and abiding interest in landscape and nature as cultural categories, and above all in the garden as a metaphorical space, she weaves an intricate web of themes and images that can be combined and recombined in many different ways. The portrayed subjects include friends, family members and fellow artists, but also people whom Bittermann does not know personally yet are important to her for other reasons, for example because of their artistic or scientific achievements. The accumulation of these portraits thus creates a combined image of actual and perceived affinities that includes, for example, the profiles of Marcel Broodthaers, Charles Darwin, Hannah Arendt and Maria Sibylla Merian. Bittermann develops this portrait series around external and internal dialogues. The former are real dialogues that have taken place between the artist and those portrayed, on the basis of which she assembles visual material on a computer screen. These pictorial composites are then translated into painted images that are shown inside the profile of the subject’s head. The internal dialogues, on the other hand, provide the starting point for pictures of individuals Bittermann does not know personally or who are already deceased, although such dialogues may also determine her portraits of friends or acquaintances to a certain extent.