In the last picture-series of “Die Dritte Kammer” titled “bildhausworthain” the functions of the four “Aechte Blumisten” had been  revisited – starting from a digital work on the “Venus Temple in Wörlitz”.  On a purely pictorial level, these had been returned to completely fictitious garden designs, in which these functions were transformed into architectural-sculptural structures and were clarified in programmatic compositions. For years, the intention had been to depict fictitious gardens in paintings and prints until one day someone would invite us to build a real garden. Since the “secret gardens of rolandswerth” had been completed in 2004 for the “Skulpturenufer Remagen” of the Arp Museum Bahnhof Rolandseck and the last pictures had been completed “after” this garden, the circle that had been so essential in “The Third Chamber” was closed: to find from the image into the garden and from there back into the image.

The loop of thought of the transfer between imagined/painted and actual space, which was completed in “Die Dritte Kammer”, I take up in 2004 in a new long-term project – now working alone again. The theme of “writing” and the “physically experienceable word” also remain significant in my work. In variations, I have since developed a series of paintings that I call “Jardins d’amis – Silhouettes”. Meanwhile, it includes over 140 portraits and led into the realisation of  a garden artwork in South Africa in winter 2011/12, which deals with the theme of “origin” and “paradise” primarily on a scientific level. Once again “the speculation completed leads back to nature” – as already before in the “secret gardens of rolandswerth”. My “return” from the “Garden of Eden” of the South African “Cradle of Humankind” into painting can be seen in the foyer of the museum: portrait paintings of two South African gardeners.

A film documents the associated research and construction phase of the “Gate in Ruin” and can be seen in a short version in the exhibition. The long version can be read as text of a scenario in the exhibition catalog. A garden folly model was built especially for the filmscreening, which as exhibition architecture, in addition to the miniature cinema, also forms the base for the garden and nature models from the years 1992-95. The folly is surrounded by a wallpainting that brings the beholder down to the floor of a (graphically reduced) excavation site, which opens up the spatial dimension of a “voyage of discovery” for the 100 portraits from the series of “Jardins d’amis – Silhouettes”. 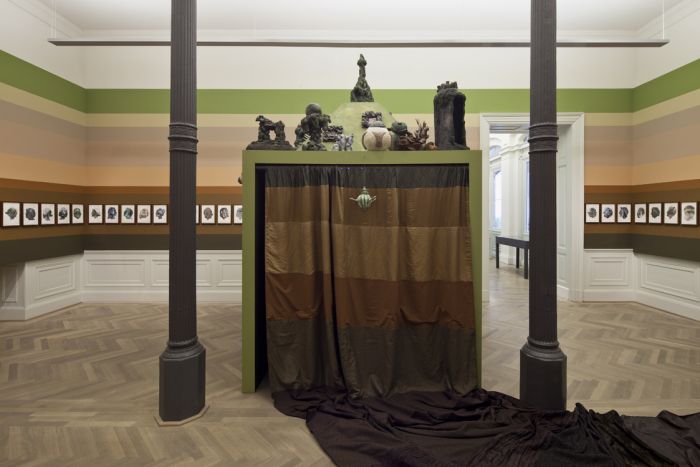