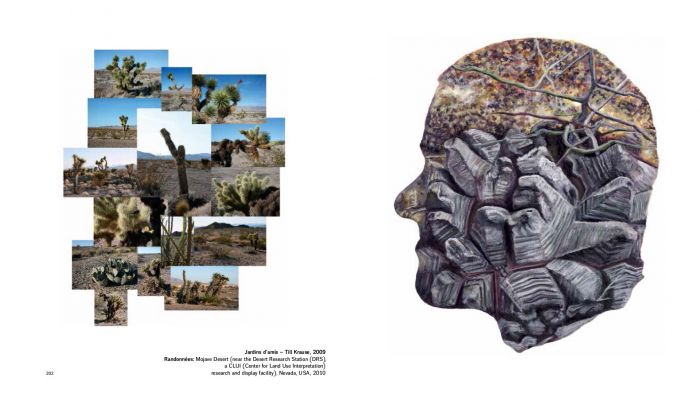 The book as a place of action

Collections and archives of artists have existed since antiquity. However, the form with which they appear changes with each era. The garden book represents one of these forms since the Hypnerotomachia Poliphili by Francesco Colonna. The present book Jardins d’amis : Randonnées – Aus dem GartenArchiv der Caroline Bittermann has now, with its 360 pages, taken the form of an “artist’s encyclopedia” that presents itself as an artistic work in its own right.

The starting point of this publication is the “garden”. For me, it is both an artistic medium and a system of reference in terms of content. It is a “rhetorical landscape”, a utopian space of thought for current theories of the picturesque and the romantic, and a heterotopic source for pictorial models that are transformed into paintings, garden models, and installations, which in turn can become models for working with garden sculptures and real plants. An important link between these worlds and media is the “gardener.” As a metaphorical figure, he exemplifies the human principle in designed nature and his means of expression is a quotation-like speech that requires a permanent designing and discarding of signs and reference systems.

The artist’s encyclopedia becomes the vehicle for this complex structure of references. The Jardins d’amis, a series of paintings developed since 2006 and meanwhile comprising more than 150 portraits, which “documents” the many years of history of a network of relationships (Jardins d’amis = friendship gardens) is shown on the right side of each book. On the left, photos from my extensive garden archive are juxtaposed with these paintings. The archive has been in constant creation since 1989 and has never been shown publicly until now. The photos are assembled in clusters like “storyboards” to a “walk” (randonnées = walks) and juxtaposed with the painted portraits.

Two medial worlds enter into a relationship with each other on the third level of the book – often discursive in content, sometimes more formal. Each double-page spread forms its own world of reference and enables a general reflection on the significance of the relationship between “real” and “ideal” places. In its abundance of images, the publication has the task of serving as a provisional site for an assembly of diverse ideas and, like a cabinet of curiosities or an archive of images in the Warburgian sense, to accumulate world designs and references to reality and to re-evaluate – or reassess – them through associative combinatorics.

Artist statement from the book:
“Painting is the terrain where stems the quintessence of my life‘s work as an artist. It
all emanates from the act of painting and it all returns to it. Whether it leaves the canvas for
the walls, whether it expresses itself on garden models, on stages or on costumes, behind
lenses or on screens, painting is a challenger that is constantly being questioned. It can
even expand to a garden where painting is done with plants and word-sculptures. Under my
brush and a magnifier, it implodes into miniature portraits, which scrutinise the core of the
realm of human imagination. It comments itself using citations throughout art-history and
art-theory, thus incorporating it’s own Other. Site or Nonsite: again and again, it feels as
free as to show itself where it hadn‘t been seen before, where there is still land to conquer.”